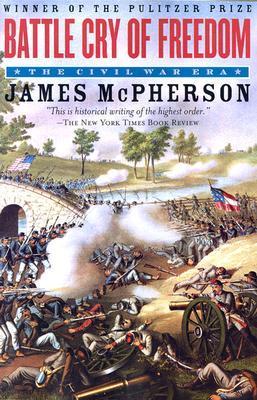 The Civil War Era. Winner of the Pulitzer Prize 1988

Filled with fresh interpretations and information, puncturing old myths and challenging new ones, Battle Cry of Freedom will unquestionably become the standard one-volume history of the Civil War. James McPherson's fast-paced narrative fully integrates the political, social, and military events that crowded the two decades from the outbreak of one war in Mexico to the ending of another at Appomattox. Packed with drama and analytical insight, the book vividly recounts the momentous episodes that preceded the Civil War-the Dred Scott decision, the Lincoln-Douglas debates, John Brown's raid on Harper's Ferry-and then moves into a masterful chronicle of the war itself-the battles, the strategic maneuvering on both sides, the politics, and the personalities.

Now featuring a new Afterword by the author, this handy paperback edition of the Pulitzer Prize-winning "Battle Cry of Freedom" is without question a definitive one-volume history of the Civil War.

Anyone interested in Texas and the republic to which it belongs should set some weeks aside for this big, smart porcupine of a book Patrick G. Williams, Southwestern Historical Quarterly

James M. McPherson is Edwards Professor of American History at Princeton University. His books include The Struggle for Equality, Marching Toward Freedom, and Ordeal by Fire.

Gods and Generals: A Novel of the Civil War
von Shaara, Jeff
Kartoniert