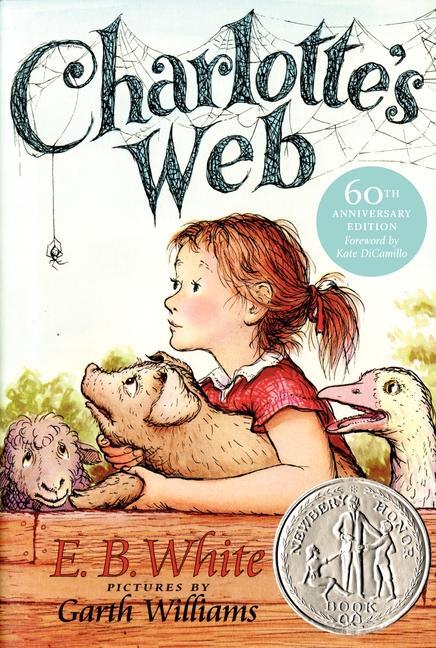 Sixty years ago, on October 15, 1952, E.B. White's Charlotte's Web was published. It's gone on to become one of the most beloved children's books of all time. To celebrate this milestone, the renowned Newbery Medalist Kate DiCamillo has written a heartfelt and poignant tribute to the book that is itself a beautiful translation of White's own view of the world?of the joy he took in the change of seasons, in farm life, in the miracles of life and death, and, in short, the glory of everything.

We are proud to include Kate DiCamillo's foreword in the 60th anniversary editions of this cherished classic.

Charlotte's Web is the story of a little girl named Fern who loved a little pig named Wilbur?and of Wilbur's dear friend Charlotte A. Cavatica, a beautiful large grey spider who lived with Wilbur in the barn.

With the help of Templeton, the rat who never did anything for anybody unless there was something in it for him, and by a wonderfully clever plan of her own, Charlotte saved the life of Wilbur, who by this time had grown up to quite a pig.

How all this comes about is Mr. White's story. It is a story of the magic of childhood on the farm. The thousands of children who loved Stuart Little, the heroic little city mouse, will be entranced with Charlotte the spider, Wilbur the pig, and Fern, the little girl who understood their language.

The forty-seven black-and-white drawings by Garth Williams have all the wonderful detail and warmhearted appeal that children love in his work. Incomparably matched to E.B. White's marvelous story, they speak to each new generation, softly and irresistibly.

E. B. White, the author of such beloved classics as Charlotte's Web, Stuart Little, and The Trumpet of the Swan, was born in Mount Vernon, New York. He graduated from Cornell University in 1921 and, five or six years later, joined the staff of The New Yorker magazine, then in its infancy. He died on October 1, 1985, and was survived by his son and three grandchildren.

Mr. White's essays have appeared in Harper's magazine, and some of his other books are: One Man's Meat, The Second Tree from the Corner, Letters of E. B. White, Essays of E. B. White, and Poems and Sketches of E. B. White. He won countless awards, including the 1971 National Medal for Literature and the Laura Ingalls Wilder Award, which commended him for making a "substantial and lasting contribution to literature for children."

During his lifetime, many young readers asked Mr. White if his stories were true. In a letter written to be sent to his fans, he answered, "No, they are imaginary tales . . . But real life is only one kind of life-there is also the life of the imagination."

The Tale of Peter Rabbit
The original and authorized edition
Gebunden