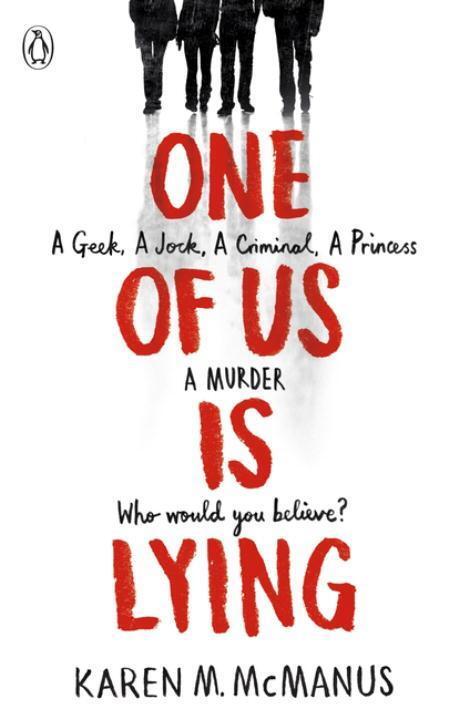 One of Us is Lying

Five students at Bayview High walk into detention. Bronwyn, Addy, Nate, Cooper, and Simon, the creator of Bayview High's notorious gossip app. Only, Simon never makes it out of that classroom. Before the end of detention, Simon's dead and it wasn't an accident. He'd planned to post juicy reveals about all four of his high-profile classmates, which makes all four of them suspects in his murder.

Five students go to detention. Only four leave alive. For fans of Gossip Girl and Pretty Little Liars, this is the perfect high school thriller. Yale hopeful Bronwyn has never publicly broken a rule. Sports star Cooper only knows what he's doing in the baseball diamond. Bad body Nate is one misstep away from a life of crime. Prom queen Addy is holding together the cracks in her perfect life. And outsider Simon, creator of the notorious gossip app at Bayview High, won't ever talk about any of them again. He dies 24 hours before he could post their deepest secrets online. Investigators conclude it's no accident. All of them are suspects. Everyone has secrets, right? What really matters is how far you'll go to protect them.

Karen M. McManus is the #1 New York Times and international bestselling author of young adult thriller/mystery novels, including One of Us Is Lying, One of Us Is Next, Two Can Keep a Secret, and The Cousins. You'll Be the Death of Me will be her next novel, publishing December 2021. Her work has been translated into more than 40 languages worldwide.
Karen lives in Massachusetts and holds a master's degree in Journalism from Northeastern University, which she mostly uses to draft fake news stories for her novels.
For more information, visit (...) or @writerkmc on Twitter and Instagram.

One of Us Is Lying
von McManus, Karen M.
Kartoniert

The Hate U Give
von Thomas, Angie
Kartoniert

This Is Where It Ends
von Nijkamp, Marieke
Kartoniert