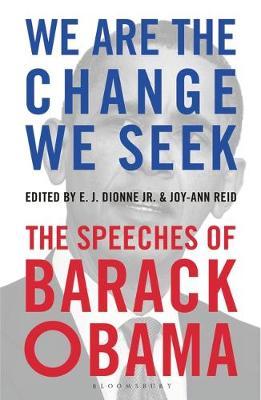 We Are the Change We Seek

The Speeches of Barack Obama

'We have been given the first partial, though still substantive, look at Obama's words, and it is a political partisan's dream to see them so finely gathered here' Washington Post

'Change will not come if we wait for some other person or some other time. We are the ones we've been waiting for. We are the change we seek' In his speeches as president, Barack Obama had the power to move people from all over the world as few leaders before him. We Are the Change We Seek is a collection of twenty-seven of Obama's greatest speeches, covering the issues most important to our time: war, inequality, race relations, gun violence and human rights. With brief introductory remarks explaining the context for each speech, this is a book to inform, illuminate and inspire, providing invaluable insight into a groundbreaking and era-defining presidency.

A thoughtfully chosen selection ... We see Obama in hope-mongering high style; we see him negotiating tricky questions with forensic intelligence; we see him on the attack and we see him in grief ... Excellent Sam Leith Observer

Jr., Jr. E.J. Dionne
E. J. Dionne Jr. is a senior fellow at the Brookings Institution, a columnist for the Washington Post, and University Professor in the Foundations of Democracy and Culture at Georgetown University. He appears weekly on NPR and regularly on MSNBC and NBC's Meet the Press. His twice-weekly op-ed column is now syndicated in 140 newspapers. His writing has been published in the Atlantic, the New Republic, the American Prospect, the Washington Post Magazine, the New York Times Magazine, Commonweal, New Statesman, and elsewhere. He is the author, editor, or coeditor of numerous books, including the classic bestseller Why Americans Hate Politics, which won the Los Angeles Times Book Prize and was nominated for the National Book Award. His most recent book is Souled Out. Dionne lives in Bethesda, Maryland, with wife, Mary Boyle, and their three children.

Obama: An Intimate Portrait
The Historic Presidency in Photographs
Gebunden