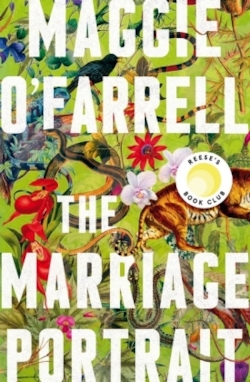 Set at the heart of the treacherous political world of the Italian Renaissance, this is the masterful story of a young woman's battle for her very survival, written with all the drama and verve that made HAMNET an international bestseller.

'I thought I had made myself clear. I want something that conveys her majesty, her bloodline. Do you understand? She is no ordinary mortal. Treat her thus.'

Florence, the 1560s. Lucrezia, third daughter of Cosimo de' Medici, is free to wander the palazzo at will, wondering at its treasures and observing its clandestine workings. But when her older sister dies on the eve of marriage to Alfonso d'Este, ruler of Ferrara, Modena and Reggio, Lucrezia is thrust unwittingly into the limelight: the duke is quick to request her hand in marriage, and her father to accept on her behalf.

Having barely left girlhood, Lucrezia must now make her way in a troubled court whose customs are opaque and where her arrival is not universally welcomed. Perhaps most mystifying of all is her husband himself, Alfonso. Is he the playful sophisticate her appears before their wedding, the aesthete happiest in the company of artists and musicians, or the ruthless politician before whom even his formidable sisters seem to tremble?

As Lucrezia sits in uncomfortable finery for the painting which is to preserve her image for centuries to come, one thing becomes worryingly clear. In the court's eyes, she has one duty: to provide the heir who will shore up the future of the Ferrarese dynasty. Until then, for all of her rank and nobility, her future hangs entirely in the balance.

Every bit as evocative and spellbinding as Hamnet. O'Farrell, thank God, just seems to be getting better and better . . . O'Farrell's writing is so vivid it melts away the time and space between now and 16th-century Italy . . . With The Marriage Portrait, then, O'Farrell hasn't just produced another magnificently transporting page-turner. She has given us an exhilarating, devastating look at women's captivity, creativity and ultimately, rebellion in a world run by some very cruel men i newspaper

Maggie O'Farrell, FRSOL, is the author of HAMNET, Winner of the Women's Prize for Fiction 2020, and the memoir I AM, I AM, I AM, both Sunday Times no. 1 bestsellers. Her novels include AFTER YOU'D GONE, MY LOVER'S LOVER, THE DISTANCE BETWEEN US, which won a Somerset Maugham Award, THE VANISHING ACT OF ESME LENNOX, THE HAND THAT FIRST HELD MINE, which won the 2010 Costa Novel Award, INSTRUCTIONS FOR A HEATWAVE and THIS MUST BE THE PLACE., and THE MARRIAGE PORTRAIT. She is also the author of two books for children, WHERE SNOW ANGELS GO and THE BOY WHO LOST HIS SPARK. She lives in Edinburgh.